On December 7th 2021, Child Rights Connect co-organised a high-level conference on Advancing children’s rights in the Caribbean by using the international and regional human rights systems to support national efforts (Read the summary of the event here).

This event was the first event of its kind in many years to bring together relevant actors in the Caribbean, including child human rights defenders, representatives from different States, civil society, UN agencies, academia and international experts, to identify how international and regional human rights mechanisms can foster child rights promotion in the region. The event promoted an insightful discussion and helped identify what are the necessary measures to build capacity on the Convention on the Rights of the Child (CRC) and its Protocols in the Caribbean.

The event was a multi-stakeholder initiative held together with the CARICOM, the Inter-American Children´s Institute (IIN OAS), the Latin America and the Caribbean Movement for Children (MMI-LAC), UNICEF, and the United Nations Special Representative of the Secretary-General on Violence against Children (SRSG-VAC), with the support from the Office of the High Commissioner for Human Rights.

Davine and Ronia, child human rights defenders from the Network of Child and Adolescent Correspondents of the IIN OAS (CORIA), set the tone of the event by emphasising the importance of children’s participation:

…“One of the most important stakeholders are the children, because without children, there are no children’s rights.” (Davine, Guyana)

In her opening remarks, Helen Royer, Director of Human and Social Development of CARICOM, expressed, expressed concern that “the idea that children must be seen but not heard” is still present in the Caribbean societies. She stressed that the event was key in “identifying more targeted actions to address the weaknesses in reporting and monitoring in the implementation of the CRC.” The Vice-President of the Committee on the Rights of the Child, Faith Marshall-Harris, stressed the fact that many States in the region were late in reporting to the Committee and urged Caribbean countries to submit State reports. She also called on organisations to increase advocacy towards the ratification of Optional Protocols and she put forward the idea of an extraordinary CRC session in the Caribbean, which may “bring the region up to speed on the realisation of children’s rights”.

Terry Ince, founding Director and Convener of the CEDAW Committee of Trinidad and Tobago (CCoTT), shared her experience in establishing a coalition of civil society organisations and activists to report to the Committee on the Elimination of Discrimination against Women.  She stressed that “it is important to develop advocacy and come together as a coalition, especially for stakeholders that have a common goal, which is to advance human rights, the rights of children, women, individuals, to ensure that we are supporting each other and working together to create changes”.

Highlighting the connections between the CRC and the SDGs frameworks, Najat Maalla M’jid, Special Representative to the Secretary General on Violence Against Children, stressed how the synergy between these frameworks can support child rights’ implementation in the Caribbean.

As this event is intended to be the first steps in a series of joint activities to strengthen child rights in the region, through an interactive discussion, participants were asked to identify what capacity building activities were needed. Many ideas were shared, including:

In the closing remarks, the UNICEF Regional Director for Latin America and the Caribbean, Jean Gough, called attention to the importance of continuing the collaboration and strengthening capacities in this region to advance children’s rights and emphasized that “this will only be possible if we come together as a group”. 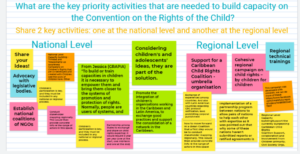