Trends on child rights at the Human Rights Council 49 session: updates on child participation and CHRDs; new resolution on family reunification; and a major win for child rights mainstreaming

Trends on child rights at the Human Rights Council 49 session: updates on child participation and CHRDs; new resolution on family reunification; and a major win for child rights mainstreaming

The 49th session of the Human Rights Council (28 February to 1 April), the longest in history, concluded with exciting news on child rights as well as some worrying trends.

During this session we saw innovative ways for the UN to involve children and be accountable to them. We also saw how children took part once again in the Annual Day on the Rights of the Child, building on past practices.

The Special Representative of the United Nations Secretary-General on Violence Against Children (SRSG on VAC), Dr. Najat Maalla M’jid, for the first time since the establishment of her mandate in 2009, prepared a child-friendly version of her annual report to the Human Rights Council. In addition, prior to the presentation of her report at the Council, she organised a dialogue with children to launch the report and gather their views.

Jorge, a Child Rights Connect Child Advisor, alongside other members of our Children’s Advisory Team, participated at the meeting with the SRSG on VAC, and once he learned he could also participate at the official presentation of her report at the Council to all States, he jumped at the opportunity to share his opinion. He made an intervention during the Interactive Dialogue with the SRSG on VAC as a civil society representative and he explained how important it is for the UN to be accessible to children.  “[This is] a very good initiative, since children from all over the world will be able to read the report, understand it and be part of a process that benefits them”, Jorge explained. 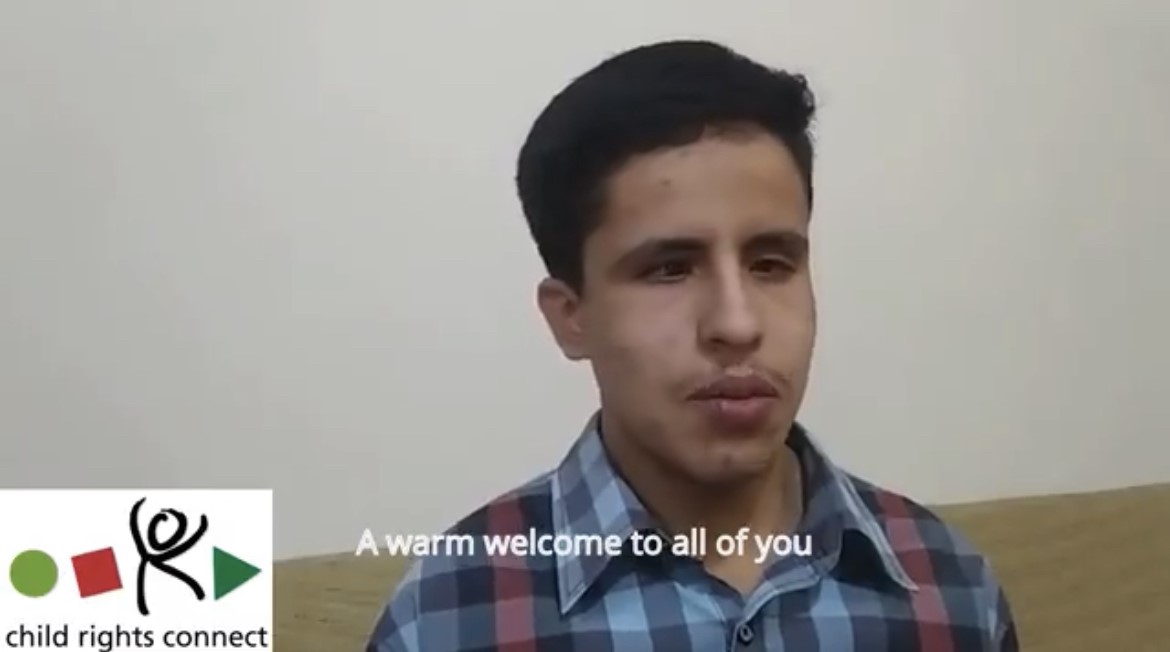 Jorge, from Bolivia, participating in the meeting with the SRSG on VAC

Najat M’jid was thrilled with Jorge’s statement on equal footing with States and civil society representatives, as an important step to normalise the participation of children at the Council.

Budling on the good practice of the SRSG on VAC, the resolution on the rights of the child requested OHCHR to produce a child-friendly version of its next report to the Council on child rights!

Nevertheless, we have a long way to go to ensure that child participation and children’s civil and political rights are respected both in practice and through standard-setting at the Council.

As in past Council sessions, some like-minded States continued to push back on strong language on child participation and child human rights defenders (CHRDs), requesting the inclusion of the role of parents in a way that undermines the autonomy of children as right holders.

Since the beginning of the negotiations, Child Rights Connect worked with child-rights friendly States to advocate for the inclusion of CHRDs in the resolution. Switzerland, followed by the European Union and some GRULAC States, was very vocal during the two rounds of negotiations. Nevertheless, Norway, as the main sponsor of the resolution, lacked the will to push for the inclusion of child human rights defenders given the difficult negotiations and lack of reported violations of the rights of child human rights defenders. Supportive States expressed strong discontent with Norway’s decision not to acknowledge the important role of CHRDs. For more information see the dedicated op-ed from Norwegian civil society.

A lesson learned is that gaining new language on CHRDs at the Council does not mean that it will be automatically considered for future resolutions and that sustained awareness raising, monitoring and reporting on the rights of CHRDs is needed.

This year’s Council Resolution on the Rights of the Child focused on family reunification in the context of migration and children allegedly associated with armed forces and armed groups, including terrorist groups. The negotiations were very intense showing the existing polarisation among States on how many still don’t view children as right holders independent from their parents or caregivers. States pushed back on progressive language on child participation, diverse forms of families, gender, including gender-based violence and sexual and reproductive health rights, and the prohibition of immigration detention, among other aspects.

Following a steady advocacy from Child Rights Connect and our members, the resolution includes strong standards on, among other issues:

On the prohibition of immigration detention, Child Rights Connect, in collaboration with UN agencies and members, managed to ensure that the language in the resolution is not regressive by referring to the need for States to put in place non-custodial alternatives to detention.

This resolution can be an important tool to strengthen standards and practices on family reunification at all levels.

Following long-term advocacy from Child Rights Connect and the UN Office for Human Rights, the Resolution on the Rights of the Child includes a new mandate on child rights mainstreaming. Thanks to the leadership of the European Union and Uruguay, the resolution requests the UN Office for Human Rights to prepare a comprehensive report, in an accessible format, with specific recommendations on how to strengthen a child rights-based approach in the work of the United Nations. This should be done in consultation with all relevant stakeholders, including through consultations with children themselves!

This request is a long-awaited follow-up to the Council’s high-level panel on human rights mainstreaming held in 2020 and it will aim at informing the process of development and implementation of the UN Guidance Note on Child Rights Mainstreaming.