The world is experiencing an unprecedent mobilization of children acting to address the most pressing challenges faced by humanity. Moldova is no exception. Children are increasingly acting as human rights defenders to realize human rights and advance social justice for all, speaking up on various issues, from the environment to racial discrimination, from violence, including online, to alternative care and sexual education, through engaging in online and offline awareness-raising campaigns, protests, and other activities from the local to global scale. 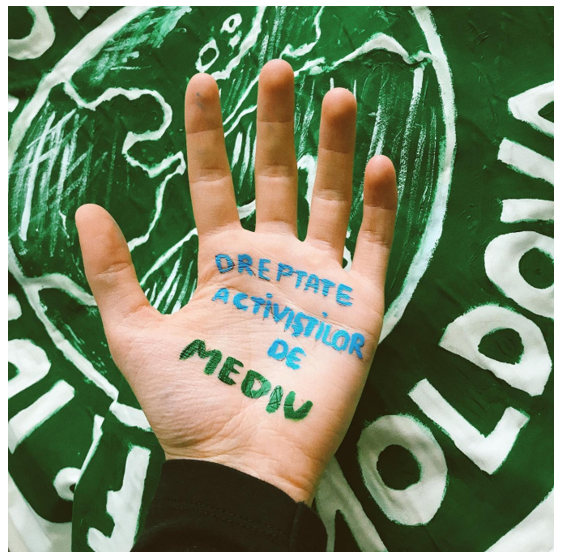 Yet, these child human rights defenders (CHRDs) face critical, distinct obstacles, the most fundamental of which stems from the widespread lack of recognition of their existence and of understanding their distinctive role, status and rights, as documented in Child Rights Connect’s “Rights of CHRDs: Implementation Guide” (the Guide). This key challenge is grounded in “adultism”, or the belief that adults are inherently more valuable than children and that, as such, they are entitled to act in place of children without agreement or in ways that interfere with their capacity to exercise agency over their lives.

As experienced in the work of the Child Rights Information Centre Moldova (CRIC Moldova), a member of Child Rights Connect’s Network, the activities of Moldovan CHRDs are not visible, and seldom supported. They are often unaware that they have the right to act, be empowered and protected as CHRDs and regularly face risks to their safety, including bullying, threats and intimidation. In CRIC’s submission to General Comment 37 of the UN Human Rights Committee on the right to peaceful assembly, a 17-year-old Moldovan girl explained: “After the [Fridays for Future] strike, the administration of a school from which several students [attended] the strike gathered everyone from the school to threaten to expel the students who [had] participated in the strike during school. They threatened with expelling or not admitting [students] to the final exam.” Civil and political rights of children are largely unknown and neglected, including among many civil society organisations (CSOs). The issue of children’s political participation is particularly sensitive. This is further fueled by the absence of a domestic law on the protection of human rights defenders, and a lack of coordinated efforts between child rights organisations and human rights organisations in the country.

“After the [Fridays for Future] strike, the administration of a school from which several students [attended] the strike gathered everyone from the school to threaten to expel the students who [had] participated in the strike during school. They threatened with expelling or not admitting [students] to the final exam.”

Some solutions brought by CRIC and Child Rights Connect

In response to this, and in line with Strategic Priority 1 of Child Rights Connect, focused on child participation and the empowerment of CHRDs, Child Rights Connect and CRIC Moldova jointly initiated a new project in 2021 aimed at advancing the realization of CHRDs’ rights in Moldova, through piloting implementation of the Guide at the national level. The collaboration of Child Rights Connect and CRIC Moldova on this topic dates back to 2018 when, on Child Rights Connect’s prompting, the 2018 Day of General Discussion (DGD) of the UN Committee on the Rights of the Child (CRC Committee) “Protecting and empowering children as human rights defenders” acted as an eye-opener about the barriers to the realization of the rights of CHRDs. Both organisations played a significant role around the 2018 DGD, channeling child participation, influencing the DGD Outcome report, and following up on its recommendations. CRIC also contributed, as part of a wider expert advisory group, to the development of the Guide which has been, and will be further used, to build awareness and legal understanding of what it means to be a CHRD and how CHRD rights must be respected, protected and fulfilled at the national level.

To stir collaboration between civil society and other non-State actors in Moldova, Child Rights Connect and CRIC engaged the Children’s Ombudsperson (part of the National Human Rights Institution called the Ombudsperson’s Office) and more than 30 national civil society actors representing around a dozen CSOs (both child rights and human rights organisations, including other Child Rights Connect’s Network members) over three online capacity-building sessions in May, June and September 2021. These sessions focused on raising awareness and understanding of why and how the rights and specificities of CHRDs should be mainstreamed within advocacy, and frameworks related to child rights and human rights defenders in general. This was the first time that all these actors sat together to discuss the whole set of rights of CHRDs, and it was a unique opportunity to clear misunderstandings such as around the definition of CHRDs. “Participants were inspired, with ideas on how they can use the guide, for example to promote human rights education in schools and get in touch with you or the Scottish Ombudsperson to get advice on some concrete issues” (CRIC Director, after the first CSO workshop). In parallel, around 30 Moldovan CHRDs were mobilized over three online capacity-building sessions in June, July and September 2021 for them to learn more about their rights as CHRDs, using the child-friendly version of the Implementation Guide (developed in consultation with Child Rights Connect’s global team of child advisors in 2021 and translated into Romanian by CRIC and CHRDs). Sharing their views and experiences on CHRDs in Moldova, a situation analysis was developed which assessed good practices, gaps, challenges and recommendations, leading to the creation of a common action plan to determine priority actions and guide next steps.

The situation analysis was used to develop the very first civil society submission as part of the Universal Periodic Review (UPR) focusing entirely on CHRDs. The report was developed in consultation with a group of CHRDs and was supported by the Children’s Ombudsperson and endorsed by CRIC and other CSOs such as the Alliance of Active NGOs in the field of Child and Family Social Protection, Amnesty International Moldova, Ave Copiii, the National Centre for Child Abuse Prevention and Promo-LEX. Following an online training session for CHRDs on engagement as part of the UPR, grounded on Child Rights Connect’s child-friendly Guide on the UPR, ‘The UPR & Me’, CRIC empowered CHRDs to use the report to develop their own CHRD factsheet, including for advocacy with States, such as through the participation in the UPR Info pre-session at the end of 2021. In December, the group of Moldovan children engaging in the UPR were supported to initiate a child-led campaign, which included the publication and use of Child Rights Connect’s video on CHRDs in Romanian, available in the front page of our CHRD’s mini-site.

At the same time, the Ombudsperson’s Office launched a public call for a comprehensive law on human rights defenders and the Children’s Ombudsperson proposed that this law to include a specific chapter on CHRDs. Child Rights Connect endorsed a joint civil society submission led by CRIC to welcome the initiative and provide some key recommendations including for children’s participation throughout the process and the focus on the protection of CHRDs to be balanced with empowerment. Child Rights Connect and CRIC also urged States to use the UPR to acknowledge and support this initiative, with the result that, during Moldova’s UPR review in January 2022, Mexico called for the State to develop a comprehensive law on human rights defenders. In its reply to the report of the UPR Working Group, the Government of Moldova ensured that the UPR recommendations will inform the next national human rights action plan and that civil society will be consulted.

What difference did this make

The results of this multi-stakeholder’s engagement are tangible, with significant potential for sustained impact:

What the next steps are

The next steps include further building the cooperation with the Children’s Ombudsperson to help advance a child rights approach to the new law, bringing international support and attention to the process, further fostering collaboration with CSOs including human rights organisations, continuing the strong focus on empowering CHRDs at the community and national level, using the forthcoming UPR recommendations to advance the activities of the common action plan and linking all this to the forthcoming review of Moldova by the Committee on the Rights of the Child. Activities to build the capacity of CSOs for the upcoming review will link to and build on the activities relating to CHRDs. Importantly, this pilot project in Moldova provides a model framework for implementing the Guide at the national level, with strong potential for replication. Local stakeholders in Thailand have voiced strong interest for a similar capacity-building initiative in their country.

Amongst challenges faced, convening the capacity-building workshops fully online was difficult as the content was heavy. This also meant reduced opportunities for Child Rights Connect to build personal relationships with national actors. The first workshops also showed that the time to go through the definition of CHRDs and how to use the terminology with children and CSOs should not be underestimated, as a pre-requisite for ensuring that everyone is on board and speaks the same language. The difficulty of convincing States to prioritize issues around CHRDs’ rights within the UPR process, amongst other priorities, shows the need for increased, sustained State engagement at all levels. To address this, in 2022 Child Rights Connect will develop a thematic brief for diplomats on advancing the rights of CHRDs through the UPR, which will be presented to diplomats jointly with UPR Info and in collaboration with the Special Rapporteur on the situation of human rights defenders.

Child Rights Connect and CRIC have drawn strong learning from this project. The key enabling factors of the project were the long-standing collaboration between the two organisations and the timeliness of the project considering CHRDs’ mobilization and expectations towards CSOs. The involvement of all key CSOs including broader human rights organisations beyond the children’s rights sector allowed for thought-provoking discussions to help broaden collective knowledge and understanding of the context and rights of CHRDs. The empowerment of CHRDs throughout the process was essential not only because this is their right, but because it allowed an accurate interpretation of the key challenges and priorities to focus on. Building allies at the international level brought attention and support for advocacy on CHRDs at the national level, and strategically linking national and international level advocacy proved to be an effective approach.