#GA2022: Child Rights Connect reaches 100 organisations in the network and speaks with a stronger voice for child rights mainstreaming

#GA2022: Child Rights Connect reaches 100 organisations in the network and speaks with a stronger voice for child rights mainstreaming

Members and observers of the Child Rights Connect network convened on 2 and 3 June 2022 for the annual General Assembly, an encounter dedicated to discussing and approving key documents, electing members of the Executive Committee as well as admitting members and observers of the network, and foster and strengthen dialogue on strategic issues among the global movement for child rights. More than 70 representatives from national to international organisations dedicated to realizing child rights came together in Geneva and online, in hybrid format sessions.

This General Assembly constituted a key moment in the life of the network on several counts. By collectively reviewing the 2021 Annual Report of Child Rights Connect, members reflected on the results delivered by the network in 2021, a year marked by exceptional challenges related to the COVID-19 pandemic and its continued impact on child rights violations, but also significant strides and opportunities to promote the child rights agenda. Participants unanimously approved the report and commended Child Rights Connect’s engagement and contributions in a very challenging context. “Big congratulations to the team for an excellent report and an outstanding year!”, said one of our members participating in Geneva. For the current year, members revised and consensually validated the annual work plan and budget, voicing strong support for the relevant work undertaken by Child Rights Connect around the world.

Members and observers in person at the Child Rights Connect #GA2022

New members, observers and the milestone of 100 organisations in the network

Our global engagement is set to be strengthened with the admission to the network of eleven new member organisations from four different continents: Action Le Vert in Democratic Republic of the Congo; Alana Institute in Brazil; Asylex in Switzerland; Changefactory in Norway; Disable Development & Educational Foundation (DDEF) in Bangladesh; Excellence Academy in India; Fondation Apprentis d’Auteuil International (FAAI) in Switzerland; Future Hopes Integrated Development Organization (FHIDO) in Ethiopia; Gruppo di lavoro per la Convenzione sui diritti dell’Infanzia e dell’Adolescenza in Italy; International Coalition for Children with Incarcerated Parents (INCCIP) in Scotland; and Martin James Foundation in the United Kingdom. With a number twice as high as the number of members welcomed to the network last year and around 45% of new member organisations based in the Global South, this marks solid progress towards further realizing a strategic commitment to diversify the organisation’s membership through increasing membership from the under-represented regions of Africa, Asia and Latin America. At a time when human rights and the rights of the child face so many challenges, it also further testifies to the relevance of the network.

AsyLex is excited to announce that we are now part of the '@ChildRightsCnct Network'.🎉

We are looking forward to engaging with the community in topics related to child rights, access to justice and more.🧑‍🤝‍🧑🙌#AsyLex #cooperation #childrensrights #humanrights #accesstojustice

This year, for the first time, and in implementation of a pilot on strengthening membership adopted at last year’s General Assembly, Child Rights Connect also welcomed organisations with an observer status into the network. While they do not have voting power, observers are expected to actively participate in the delivery of the network’s mission by contributing their unique technical expertise and own networks. Five organisations were welcomed as observers, including two child/youth-led organisations: the Global Partnership to End Violence against Children with a global reach; Inter-American Children ́s Institute (IIN-OEA) based in Uruguay but working across Latin America; The Foundation for the Student Rights in Poland; Children 4 Peace (C4P), child-led organisation working in Cameroon; and the European Network of Ombudspersons for Children (ENOC) in Europe. With these new additions, Child Rights Connect has reached the milestone of 100 organisations in its network!

We are absolutely delighted to have been accepted as members of @ChildRightsCnct at their recent GA! So proud to be part of this important network, also as co-chair with @PNNAPES of their working group on Children with Imprisoned Parents. pic.twitter.com/2Kj4YErCuI

The governance of the network was also further strengthened and diversified by the first-time election to the Executive Committee of Flutra Gorana (Lebanon) from War Child Holland as well as the re-election of María Herczog (Hungary), Catherine Mbengue (Cameroon), and Maria Amihan Abueva (Philippines). With these changes, the governance structure of the organisation further improves its regional representativeness (with around 71% of the members now coming from the Global South, including a representative from the MENA region), also a key priority pursued in implementation of the organisation’s Strategic Plan.

The annual General Assembly was also a unique moment to strategize with members and observers on a key topic, how to build back better from the pandemic through ensuring child rights mainstreaming. Simply put, child rights mainstreaming is the systematic application of a child rights approach to everything we and others do, from the local to the international level. Child Rights Connect has been promoting this agenda since 2004. It received greater attention after the UN Secretary-General’s milestone decision to develop a Guidance note on child rights mainstreaming, as a response to Child Rights Connect’s position paper voicing a strong call for the UN to put child rights at the core of its actions, which was endorsed by 100 organisations, including many network members. In 2022, an inter-agency process led by a core group of four UN entities – OHCHR, UNICEF and the two Special Representatives to the Secretary-General with a mandate focused on child rights – voiced their commitment to consult with civil society and children in the development of such Guidance Note and tasked Child Rights Connect with leading those consultations.

Members, observers and Child Rights Connect’s Secretariat joined force to discuss and further elaborate a collective advocacy plan to push for child rights mainstreaming, within the UN system and beyond, and engaged in a dialogue with UN representatives on child rights mainstreaming. The discussion with CRC Committee members and experts from the UN Office of the High Commissioner for Human Rights (OHCHR) was an opportunity to identify and understand how civil society can influence and support the development of the guidance note, especially in relation to safe, empowering, inclusive and sustained child participation throughout the process, as well as the future implementation of such guidance. “The UN system will not be able to achieve its goals on peace, security and human rights unless it promotes child rights mainstreaming”, said Peggy Hicks, the OHCHR’s Director of the Thematic Engagement, Special Procedures and Right to Development Division.

For the first time too, the General Assembly included the direct participation of several of our Child Advisors, members of the Child Rights Connect Children’s Advisory Team, who actively contributed to the thematic discussion on child rights mainstreaming during the second day of the meeting. Child advisors addressed CRC Committee members, OHCHR representatives and Child Rights Connect’s network sharing their views on what child rights mainstreaming means for them, why it is critical to realizing their rights, and what the UN and civil society can do, particularly in support of child participation.

Ploy, our Child Advisor from Thailand, explained: “Child rights mainstreaming for me is when the state and decision-makers understand and recognize child rights. They must return the power and provide us the space of human beings to the children. This can be done by two recommendations. Firstly, give us more political rights to participate in the elections, draft the education law under the fair legal process. Secondly, increase our participation in decision-making process of the laws, government policy and school policy”. Miriam, our Child Advisor from Lebanon, suggested to “use schools for discussion, use social and printed media, evaluate the work done via online forms and have a Children’s Advisory Team (CAT) in the board of organisations“, as solutions to promote child participation in mainstreaming child rights. 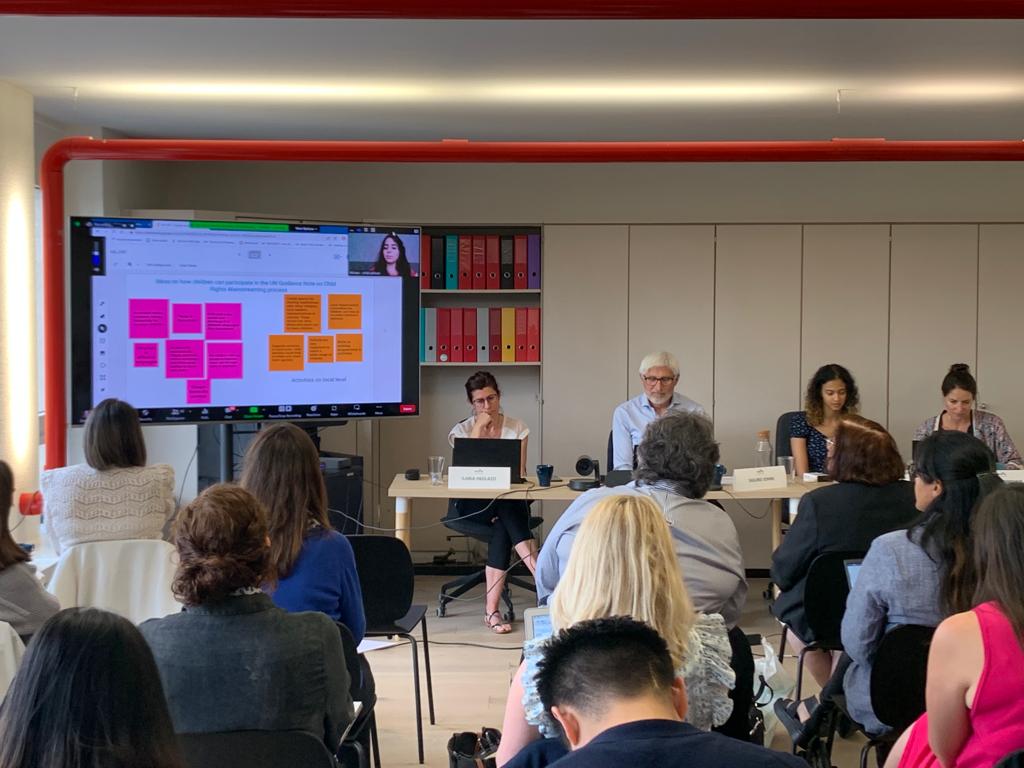 To act on ideas and commitments made, the General Assembly will be followed by the further elaboration of the network advocacy strategy and active participation in the UN consultations on the development of the Guidance Note on child rights mainstreaming. More broadly, a further series of webinars focusing on specific substantive topics to which all network organisations will be invited, will allow to take forward the priorities collectively identified during this General Assembly.